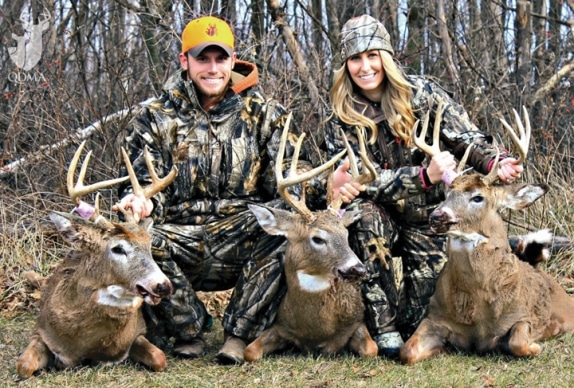 Meet Michael and Julie Joy of Port Hope, Michigan. They are QDMA members and officers in Michigan’s Thumb Area Branch (Julie is treasurer and Michael is a Branch Board member).

How long have you practiced QDM?

Julie: I’ve been a QDMA member since 2011, and until this year I had only harvested does and passed on several bucks. Michael has been doing it since he became a QDMA member in 2007. He decided he was tired of harvesting small bucks and really wanted to see some bigger ones. There was only one way to do that, and that was by passing yearling bucks and spreading the word. He didn’t shoot a buck for six seasons, until he killed two in 2013.

What benefits have been your favorites?

Julie: The greatest benefit is that you never stop learning about deer and habitat management. There have been challenges, like getting others on board with QDM, and also overcoming your own thoughts of “If I don’t shoot it, the neighbor will.” But through QDMA Branch events we’ve met other people in the area who share the same interests and who gave us encouragement, and we’ve learned lots of valuable information from the magazine. We also met another QDMA member, Mark Lemke at Practical Whitetail Strategies, and he helped us with a habitat management plan for our 20 acres. All of this really helped us overcome the challenges.

We hear that two hunters killed three bucks out of one stand. What’s the story?

Julie: Friday morning, November 15, was opening day, and Michael headed out to hunt a new blind for the first time. It was located near one edge of our 20-acre property to try to take advantage of deer being pushed by opening day hunting pressure on surrounding properties. Just after daybreak, he spotted a buck coming out of the thicket. He waited for him to move toward a clear opening and took a shot at 40 yards with his muzzleloader. He watched the buck run hard, but he felt he had made a good shot, so he waited to give the buck time to expire. At that point, Michael thought he had shot a tall-tined buck he had seen while bowhunting the night before. But a short time later he looked up and there was the tall-tined buck! This completely confused him because he could have sworn he already shot that particular buck. Regardless, he was now certain that this was the buck he had seen, and he took a shot at 40 yards. Buck fever times two!

When it finally came time to track these deer and solve the mystery, he found them both within 20 yards of each other. The first deer tumbled hard and had broken its antler. The beam snapped between the base and the brow tine, and the antler was stuck in the ground about 8 yards away from where the deer was lying (Editor’s Note: this is the buck on the left in the photo, but the antler has been zip-tied in place for the picture). Even though this deer wasn’t the one he thought it was, it was still an impressive 8-point that dressed 164 pounds. Twenty yards away was the tall-tined buck that Michael originally thought he had seen at day break. Even though this deer’s body wasn’t quite as large as the other, its rack had more mass. Michael was ecstatic that he got two bucks considering it had been six years since he had harvested one!

By the next morning, lots of neighboring properties had already made some nice harvests. I didn’t have much confidence that I would see a buck out of the same blind, but we went there anyway. 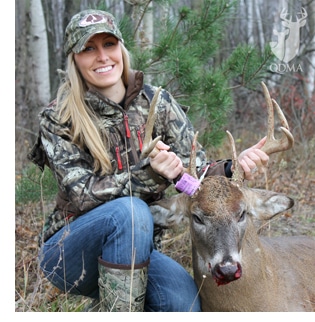 As the sun started coming up, a couple groups of does made their way into a grassy field and some into a patch of corn. Within a couple minutes, we noticed a 4-pointer chasing one of the does out of the corn. Shortly after, a spike chased a doe. Minutes later, I noticed movement in a small bunch of trees just 20 yards away from the corn and told Michael to check it out with the binoculars. Sure enough, it was a buck! We waited for it to come into the grass field and chase the doe back into the corn. At that point, we had both only seen the deer from a side profile and it was hard to tell how wide it was or exactly how many points it had. Luckily, when he came out of the corn following the hot doe, he wasn’t moving fast. I was able to evaluate him, make my decision to shoot, and then follow him until I was ready. I took the shot at 80 yards with my shotgun and watched him go down. I was beyond excited to get my first buck! He field-dressed 156 pounds.

It was official: the new blind was now “The Miracle Blind!”

For more information on how you can become involved with an existing QDMA Branch in your area, or start a new one, contact your local QDMA Regional Director.