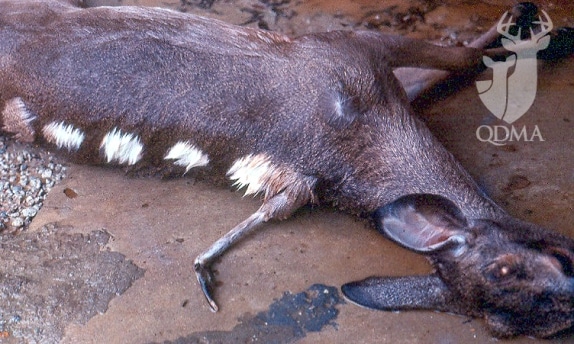 Just like people and other animals, whitetails are subject to birth defects and genetic deformities of many kinds. The buck shown above carried one of the stranger deformities we’ve ever seen. QDMA founder Joe Hamilton has this photo of a five-legged deer in his collection that comes from his many years of working with whitetails.

The buck was shot by hunter Ashley Bush in the mid-1980s near Estill, South Carolina, in Hampton County. The young buck weighed 90 pounds on the hoof. And, it bore a strange appendage: a fifth leg growing on its back between its shoulder blades. As seen in the photo, the leg itself was not completely formed, but all the parts were there, including the hooves. The leg was not functional and was loosely attached to the rest of the buck’s normal musculature. In addition, as seen in the photo, the hide bore large patches of pure white hair in a series along the spine.

This deformity is most likely what is known as a “parasitic twin.” Twin fawns probably began to develop inside a doe, but the twin embryos did not completely separate, and one of them stopped developing normally. The fifth leg on this buck may actually be a non-functioning remnant of the twin that failed to develop fully but remained attached to the healthy embryo. The white spots may be vestiges of what would have been white belly hair on the twin. Parasitic twins are rare but have been documented in many animal species and even rarely in humans.

Other than the strange attachment and white spots, this buck was healthy and was legally harvested by the hunter. The photo was taken by Joe’s colleague Louis Rogers, wildlife biologist with the South Carolina Department of Natural Resources.