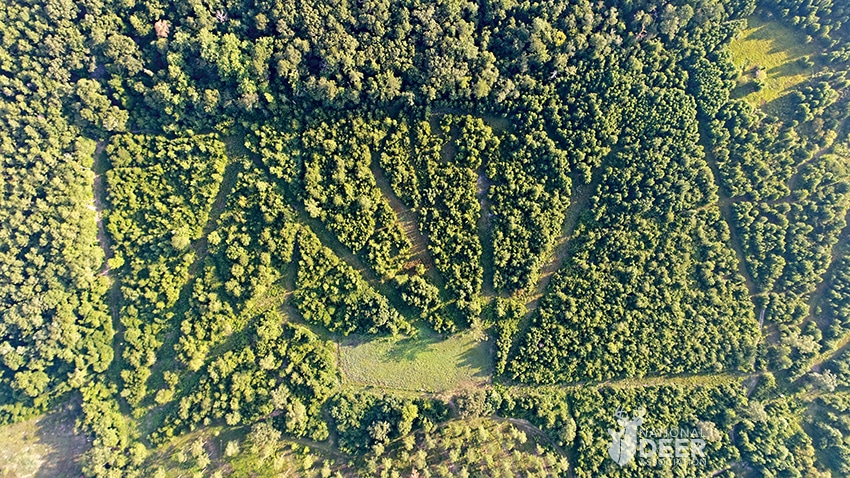 When I first began deer hunting, I would often head to the woods with a few two-by-fours, a pocket full of nails, and a hammer to erect my treestands between closely grown trees. Then I’d sit, stand or squat for hours waiting for my quarry, which more often than not never appeared. I was uncomfortable and sometimes in pain, but I was young, dumb and loved the challenge.

Some of these stands had plank floors, and once I enclosed the sides with plywood, my hunting partners and I started to refer to them as “coffin” stands. Then came the lock-ons, climbers and ladder stands, which were certainly more comfortable and produced increasing success despite being more expensive and sometimes more complicated to set up.

After purchasing land and cultivating food plots, we installed a few elevated, enclosed “shooting houses” over some of the plots. We had some luck from these shooting houses, but the best activity was often limited to last light.

Then, several years ago, we clear-cut 75 acres and positioned a few shooting houses on the elevated edge of the cut where we could hunt based on wind direction. For the first three or four years, we saw a lot of deer crossing in front of these stands, but as the natural cover regenerated visibility was limited again. At that point, we mowed lanes through the cover not unlike the “senderos” of Texas. Gradually we increased the number of mowed lanes, producing a wagon-spoke effect radiating outward from our stands. The areas between the lanes were left untouched while mowing and disking of the lanes became an annual occurrence before the season began.

More than once we have watched a buck cross a lane but didn’t get a good look but were ready for him when he came out into the next adjacent lane. The rut takes the excitement to another level with quite a bit of activity from bucks crossing the lanes either cruising or chasing.

We would also trim the edges of the lanes every couple of years to keep the vegetation from growing and limiting our visibility. Now, we have most of our shooting houses overlooking these mowed lanes.

I can sit in a comfortable arm-chair, sheltered for the most part from the cold, wind and rain, while I watch deer. No, it’s not as challenging as some other styles of hunting, but at my age I love it. And with my grandkids coming into hunting age, we can safely sit in a shooting house together while I enjoy their enthusiasm for watching deer. While deer may notice these towers initially, I’m convinced they take them for granted after a while.

Our stands are set up with varying wind directions in mind, and we have also mowed trails to these stands so the wind is in our face throughout the approach. A few of our houses are 40- to 50-feet in elevation above the bottoms of the lanes, and the wind direction doesn’t seem to matter particularly in the mornings when “thermal” air currents are rising.

We have also incorporated shooting lanes at our food plots so we can watch deer as they weave their way to the plots. Because we mow them yearly, the lanes continue to produce native forage, and it’s very common for deer to come out on these lanes to feed. I think they must feel fairly comfortable in these lanes since they are only a few jumps to thick cover.

More than once we have watched a buck cross a lane but didn’t get a good look but were ready for him when he came out into the next adjacent lane. The rut takes the excitement to another level with quite a bit of activity from bucks crossing the lanes either cruising or chasing.

So, think about where you might design some wagon-spoke shooting lanes around stands where you hunt. Clearcuts or other timber harvests present a great opportunity to create these setups so they’ll provide hunting opportunities for as long as you maintain the lanes. Any stand type will work, it doesn’t have to be a permanent shooting house.

At this stage of my life, hunting is about the enjoyment of being in the woods, relaxing, clearing my mind of normal day-to-day pressures, watching wildlife and occasionally harvesting a deer. So when I climb into a shooting house that overlooks several cleared lanes on a clear, crisp morning in November, I’m at peace with the world.

About the Author: Mike Grandey is one of 37 Charter Life Members who in 1988 helped found the Quality Deer Management Association (QDMA), which in 2020 became the National Deer Association. Mike is a Level I NDA Deer Steward and lives in Apopka, Florida.