Sunn Hemp Test Results for Summer Food PlotsSunn hemp is among the newer options for your summer food plots, and we tested it last summer at QDMA Headquarters. This short video shows you what we learned about the potential benefits and uses of sunn hemp for deer forage and cover.

Posted by The Quality Deer Management Association on Tuesday, March 21, 2017

Sunn hemp (Crotalaria juncea) is a warm-season annual legume that has garnered attention from food plotters in recent years in the everlasting search for the new magic deer forage. Sunn hemp is a tropical/sub-tropical plant native to India. Research trials for this species date back to the 1930s in the United States, but more recent interest has investigated sunn hemp’s performance as a cover crop and green manure. Sunn hemp has shown great ability to increase soil organic matter and add nitrogen to the soil for use by subsequent plantings.

Sunn hemp has bright green, simple leaves that are 3 to 5 inches long, approximately 1-inch wide, and are arranged in a spiral around the stem. It has a long tap root and a thick, fibrous stem approximately 1 to 2 inches in diameter. It can reach 6 to 10 feet tall, depending on soil fertility. The flowers are yellow. Sunn hemp grows very rapidly at an average of about an inch per day until it reaches maturity. It produces a large amount of biomass in only two to three months, however the fiber content increases drastically at this stage, making it less attractive to deer. This explosive growth strategy makes it quite resistant to browsing pressure. 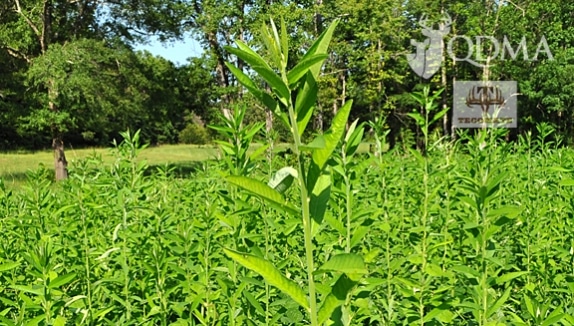 Little information exists explaining the overall quality of sunn hemp with regard to meeting the nutritional demands of whitetails. Given that it is a legume, it stands to reason that the protein level is sufficient for meeting the levels required by deer for growth and maintenance. Most reports indicate crude protein levels in the leaves and seed exceeding 25 to 30 percent. However, it does not develop seed north of 28 degrees latitude, thus seed production would be confined to the Deep South.

Sunn hemp is adapted to a wide range of soil types and is fairly drought tolerant. It performs better on poor, sandy soils than most forages, which would make it well suited for the Lower Coastal Plain in the Deep South and other areas with poor soil quality. Good production can be achieved in low pH soils as well, but a neutral pH is preferred for optimal production, nutritional quality, and attraction.

There has been some concern with using sunn hemp as an agricultural crop because it belongs to the genus Crotalaria. While there are many species of Crotalaria, some contain alkaloids in the seed that are toxic to livestock. Other species are considered noxious weeds that are problematic in agricultural settings. Nonetheless, the Tropic Sun variety of sunn hemp is not toxic to livestock and is not currently considered a noxious weed because of insufficient seed production in the United States.

I planted some in the summer of 2015 on a property in central Alabama with a very high estimated deer density of 5 acres per deer (or 128 deer per square mile). Overall, deer used it sparingly throughout the summer, and it reached about 8 feet in height. This seems to be the case for many deer managers I’ve spoken with regarding deer use of sunn hemp. However, some have described heavier use the first year it was planted, while others reported very little use the first year but significantly increased use the second time it was planted. Dr. Craig Harper of the University of Tennessee told me that deer didn’t begin eating his sunn hemp until late in the summer after they seemingly “discovered” it (see the photo below of heavy browsing on Craig’s sunn hemp). However, he planted it again the following year, and deer ate it as soon as it germinated, resulting in a failed stand. 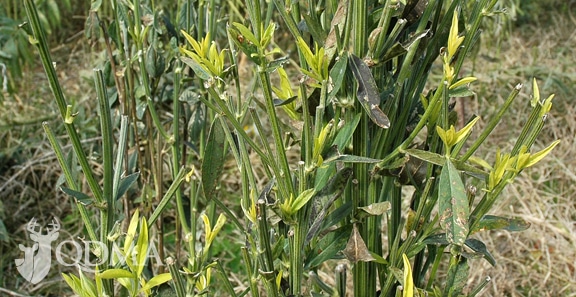 As I mentioned above, soil testing should be conducted to ensure the appropriate amounts of lime and fertilizer are applied to make sure nutrient levels are high and readily available by maintaining a neutral pH greater than 6.0.

Applying nitrogen fertilizer is not necessary when planting sunn hemp since it is a legume and produces its own. In fact, sunn hemp will produce enough nitrogen to be used by successive crops.

If broadcasting the seed, be sure to create a smooth, firm planting surface to promote good seed-to-soil contact for optimal germination. If no-till planting, kill the existing vegetation with glyphosate to eliminate weed competition a couple weeks prior to planting.

Sunn hemp can be successfully established by broadcasting or no-till planting. If planting pure stands, broadcast 30 to 40 lbs./acre or drill 15 to 20 lbs./acre at a maximum depth of ½ to 1 inch. It should be planted in April to June in southern regions and May to June farther north.

Although planting a blend is typically recommended to increase nutritional diversity and plot longevity for deer, attempting this with sunn hemp may be challenging due to its aggressive growth rate and its ability to produce a large amount of biomass. Sunn hemp can quickly shade out and out-compete other species in the blend.

Editor’s Note: Tecomate has produced a commercial blend called Horn-Maker Xtreme that includes sunn hemp, cowpeas and soybeans, with a low percentage of sunn hemp to prevent it from out-competing the other legumes. A plot of this blend is seen below. Photo courtesy of Tecomate. 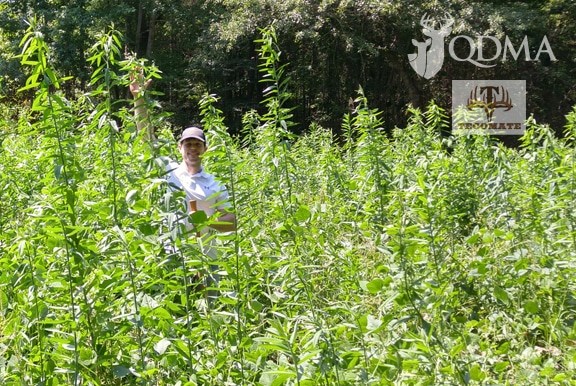 The jury is still out on sunn hemp as a quality forage option for whitetails. It is certainly capable of producing an abundance of forage and is high in protein, however it may be too much candy for a dime. That is, because it grows so quickly it reaches a stage where the lignin content accelerates as well, making much of the plant less attractive than its warm-season counterparts – like soybeans, cowpeas, lablab and others – that contain more tender leafy biomass that is much more attractive to deer for a longer period of time. This characteristic alone is an important consideration for selecting forages to plant that are going to provide the most benefit to the deer herd.

The question also remains as to how well deer like it compared to other forages that have been tested over time. More research is definitely needed to examine deer preference, as well as its performance in other scenarios. At this point it appears the best use of sunn hemp in the deer food plot arena may be as a soil improvement crop, which is grown to increase organic matter and nutrient availability for the crop that follows.

The search for the magic deer forage continues…