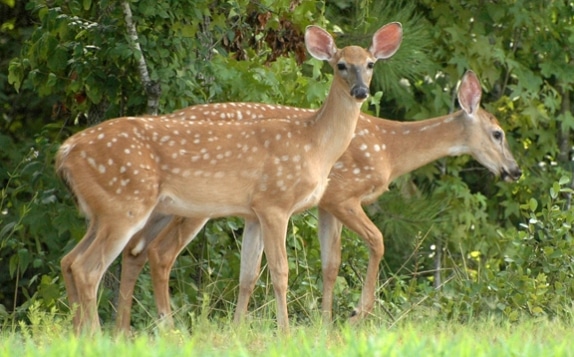 You’ve heard some people say they never shoot does “because that is like killing next year’s fawns.” While this sounds logical, it’s not always the correct approach. Doe harvest isn’t always necessary, but when it is, taking the right number of does can actually increase fawn production.

The reason is pretty simple: Healthy does raise more fawns.

Consider a deer population in which there are more deer than the local habitat can support in optimal health, whether deer density is too high, habitat quality is very poor, or both. Under these conditions, fawn recruitment is lower than it could be. Does in this population conceive and give birth to fewer fawns on average. Those fawns then experience lower survival rates due to decreased milk abundance, less quality forage for weaning, and greater susceptibility to disease, weather, predators and other mishaps due to less-than-optimal health. By fall, the number of fawns that have survived to six months of age is relatively low. You may only recruit one fawn into the fall population for every two or three does – or worse.

It’s a fact: a dead doe will not produce any more fawns. But you are managing a population, not individual deer. Killing the right individual deer can result in a stronger, healthier, more productive population.

Compare this to a population that is in balance with local habitat and where high-quality forage and browse and other foods are available throughout the year. Health is high, and stress levels are low. Most does living in these conditions will give birth to twins, and as many as 1 in 4 does can even produce triplets! Those twins and triplets are more likely to survive to fall because they receive abundant milk, they are weaned on high-quality forage, and they grow strong in less time. They are able to evade predators sooner than fawns living in poor herd conditions. They are better able to cope with stress factors like extreme weather, parasites, injuries and disease. When fall arrives, a higher number of fawns-per-doe have survived and are stronger, healthier deer as well. You might recruit a fawn for every doe, and higher fawn recruitment rates have been reported.

This is why shooting the right number of does can help a deer population produce more and healthier fawns, and that includes buck fawns.

To cite one brief example among many in deer research, consider the master’s research of Charlie Killmaster, who is now the Deer Project Leader for Georgia DNR. In 2004, a high-density population on a non-hunted state park in Georgia was reduced through doe harvest. The harvest took place after the breeding season in 2004, and Charlie found 0.79 fetuses per doe. After the very next rut, that number jumped to 1.44 fetuses per doe, nearly double in just the first year! Of course, forage quantity, deer body weights and other health factors also improved rapidly.

Your goal under QDM is to maintain deer numbers at that sweet spot where health is high, fawn recruitment is high, and hunters are pleased with the number of deer they are seeing and harvesting. But you must stay on top of doe harvest goals or again you will quickly have more deer than the habitat can support in good condition. On the flip side, there’s no reason to shoot more does than needed to maintain this balance. If you reduce the population below carrying capacity, health is certainly optimal, but your hunting enjoyment drops off because you are seeing fewer deer when you hunt.

Your goal under QDM is to maintain deer numbers at that sweet spot where health is high, fawn recruitment is high, and hunters are pleased with the number of deer they are seeing and harvesting.

The monkey wrench that can get thrown into the machinery is… you guessed it… predators. If health is optimal and fawn production is high, but coyotes or other predators are eating a lot of fawns, you have to recalculate. If fawn predation is significant enough, continuing to kill does in this situation could lead to a population decline. The easiest option is to reduce or pause doe harvest to maintain balance. Or, if you have the skills and resources at your disposal, well-timed trapping just prior to the fawn drop can reduce predation by coyotes. Either way, you must first track fawn recruitment to determine whether you have a problem.

How many fawns are being produced and recruited where you hunt? Finding the answer will help you begin making wiser choices about whether to harvest does and how many you need to take. Here are some tips on estimating the number of fawns-per-doe being recruited.

It’s a fact: a dead doe will not produce any more fawns. But you are managing a population, not individual deer. Killing the right individual deer can result in a stronger, healthier, more productive population. So, learn to estimate fawn survival, then work to ensure your local deer population is producing high numbers of healthy fawns. Promote high-quality habitat and forage in all seasons of the year. And if doe harvest is needed, remember that taking a doe this fall can actually lead to more fawns in the woods next fall.