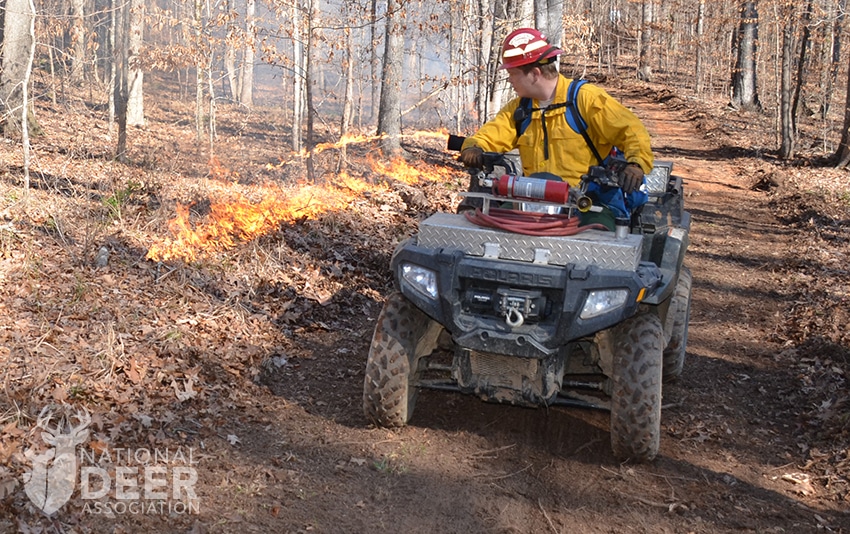 Prescribed fire improves deer habitat, and if it’s practical where you hunt, you should learn to burn. That’s a message we have harped on for years, and as more deer hunters have begun to use this cost-efficient technique, I am hearing fewer questions about burning basics and more about next-level considerations. How often should you burn? Should you divide a hunting tract into multiple “burn units,” and if so, how many and how large?

To get the best answers to these questions, I called a man whose higher education was literally trial by fire. Dr. Marcus Lashley earned his master’s degree studying wildlife habitat management at the University of Tennessee then went to North Carolina State University, where he focused his research on stages of forest regeneration following fire and what each stage provides deer. Marcus is now a habitat management specialist and assistant professor at Mississippi State University’s Deer Lab.

Prescribed fire is a tool for rewinding the history of ground-level plant growth back to stages that are beneficial for wildlife. How long you wait before rewinding each time depends on what you’re trying to produce and where you are trying to produce it. Let me break down Marcus’s advice to you by specific considerations like these.

In The Central U.S. and Southeast

“Are you trying to produce cover or food?” said Marcus. “Most often, cover is the limiting factor for deer because hunters are planting food plots or feeding. Cover requires a little bit longer interval after fire. You’re looking at four to five years to reach a stage where the understory is providing quality cover for deer. If you’re trying to provide food, burn more frequently than that, like every two to three years. Your main objective is to keep food in reach, and more frequent fire encourages forbs and other forages deer prefer.”

But you don’t have to choose to focus on cover or food: You can choose both. You can designate sections of your hunting land, or “burn units,” for different missions with different burn intervals. More on that in a moment.

More frequent fire may not be an option among upland oaks, said Marcus, because such stands may not produce enough leaf litter to carry effective fire on a two- to three-year rotation. If your hunting land includes woods like these, they can be designated for a less frequent interval.

Even at very young ages, longleaf pines are highly tolerant of fire, so for those in the Deep South who are restoring stands of longleaf, a more frequent interval of two to three years is very practical.

In Native Warm-Season Grasses or Prairie:

A frequent interval of two to three years is best for producing both food and cover, said Marcus.

“If you let a unit go beyond five years, especially southern pine forests, you start getting sweetgum thickets,” said Marcus. “You’re not providing much food anymore, and those saplings are large enough that they’re hard to kill with fire. You have to burn so hot that it can be dangerous, so you generally need to bring fire back to a unit at the longest every five years in most cases.”

That’s not to say you have to burn every acre. There are many areas that can’t be burned for various reasons. But if it’s been a long time since fire has touched a particular site, it may be safer to use herbicides or timber cutting to open the “mid-story” and restore sunlight to the ground before fire is practical again. If you’re unsure, it’s always a good idea to consult with your state forestry agency or a local consulting forester to get professional guidance before you burn.

In the Midwest and Northeast

Prescribed fire is less commonly used the further north you travel, for several reasons. Winter is generally the safest season for burning because days with predictable, stable weather conditions are more common – but in the North, snow cover usually prevents fire in winter. Also, higher human population densities make fire impractical in more areas, and a lack of traditional use compared to the South means there is less government agency encouragement and assistance for prescribed fire. But if and when you can burn, the same benefits for deer are available in the North as in the South.

“In the North, recommended fire intervals are longer because of shorter growing seasons,” said Marcus. “Forest succession is slower, and you don’t have to stay in front of it as much. I haven’t personally burned in the North, but I’m familiar with the research, and a six- to eight-year interval between fire is generally often enough to promote good cover and forage.”

Now that you’ve got some idea of the best return intervals for your goals and location, it’s a good idea to map out your burn “units” and set up a plan that will tell you which units to burn each year for several years to come. This plan will also identify existing firebreaks or those that will need to be created to separate the units.

“I’d go with more, smaller units instead of fewer, bigger ones,” said Marcus. “You’re trying to provide all the habitat components deer need, and with multiple small units in different spatial arrangements, you can provide all the components in one small area. I’m thinking 10- to 20- or maybe 30-acre blocks. Smaller than that is fine, it’s just less practical.”

As mentioned before, you don’t have to choose one burn interval for an entire property. Each unit can be burned on a different frequency, and Marcus said it’s a good idea to spread out units with different frequency intervals. However, while this patchwork approach is good for habitat, it can make planning and implementation more complex and difficult. So, as you map out your burn units and intervals, try to keep things as simple as possible.

“For example, let’s say you have 100 acres,” said Marcus. “You can divide that into four, 25-acre blocks. You might have one block that you never burn, one block that’s on a two- to three-year interval where half or a third is burned each year, one on a five-year rotation where a fifth of the block is burned each year, and so on. You’re spreading out the intervals so you get a diversity of food and cover, but your planning is less complex because you’re not mixing return intervals across the blocks.” (Refer to the example graphic below.)

Also, as you map out your burn units and future fire planning, don’t forget about hunting strategy! Remember Marcus’s words of wisdom: “Firebreaks make really good shooting lanes, especially when they are dividing food and cover!”