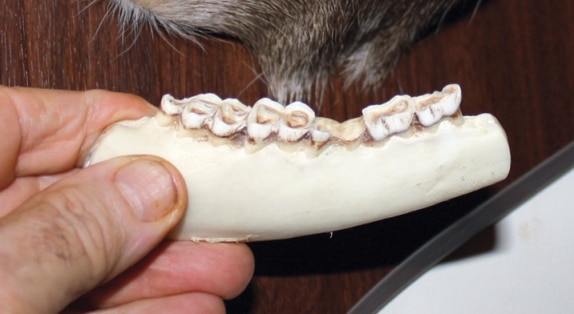 Prior to the advent of Quality Deer Management (QDM), yearling bucks comprised 70 to 90 percent of annual harvests throughout much of the whitetail’s range. In those days of traditional deer management, most 2½-year-old bucks were considered trophies due to the fact that they were rare and usually larger than the yearlings. There was a need to rectify the young age structure of bucks and the unbalanced adult sex ratio of deer populations, and QDM provided the path. Basically, this meant allowing bucks to reach older age classes and shifting more of the harvest to does. This was usually accomplished by restricting buck harvests to animals with a minimum number of antler points, spread, main beam length or mass. These larger antler characteristics, or combinations thereof, allowed the protection of young bucks. We have refrained from using the term “trophy” primarily because QDM’s purpose was biologically motivated, but also due to the general public’s dismal view of “trophy hunting.” QDM has been around for over 30 years, and is now practiced on a broad enough geographical scale that bucks of 3½, 4½, even 5½ years old and older have become much more common in many areas. Proof of this exists through the collection of cast antlers, trail-camera photos, and annual harvests across North America.

In the animal world, white-tailed deer exhibit more physical diversity than most. Some of this diversity, especially body measurements and weights, is explained by two biological principles – Allen’s and Bergmann’s Rules. These generalizations state that warm-blooded animals in cold regions tend to be larger in size and have a lower body surface to weight ratio than related animals in warmer climates.

Habitat quality, especially soil type, can also affect physical characteristics of deer. So, a property or region with a variety of soil types may grow bucks with a variety of antler characteristics – hence, reflecting the overall soil quality in their home range. Even in deer populations such as those in South Carolina, a state which did its restocking with resident animals, there exists a broad range of antler development within age classes. While this phenomenon has been shown to be related partly to soil quality, bucks inherently produce antlers of varying size and shape within age classes regardless of environmental conditions. No degree of habitat management or supplemental feeding will change this. Look around the next time you attend a class reunion or gathering of folks in general. Differences in size and shape are all too obvious, even among the adults.

QDMA teaches hunters to build age structure gradually. When starting out, a hunter passes up yearlings and wants to see and harvest more 2½-year-olds. Once this level is achieved, many hunters pass up bucks until they’re about 3½ years old. From that time on, the bucks tend to pass up the hunter. A buck that has reached at least 5½ years old is a survivor – he’s crafty, sly, elusive, and cunning. There’s no guarantee though that he will have the greatest headgear. A few uncommon bucks in any age class will produce larger than average antlers for their age, and a few will produce smaller than average antlers. Although some hunters call these smaller-antlered bucks “cull bucks,” we strongly discourage use of this demeaning term. These bucks didn’t reach their ripe-old age simply by being lucky, although some may have slipped through the cracks by having smaller antlers throughout their lives.

For this and other reasons, QDMA believes the ideal harvest criteria for bucks is age, with the specific target age depending on the starting point and goals of the individual program. Thus, aging bucks on the hoof based on body characteristics and not antler development has become important. We also know this approach is growing in popularity because so many QDMA members say they turn first to “Age This!” in each new issue of Quality Whitetails. Our five panelists state emphatically that bucks estimated to be 5½ years old or older should be harvested at the first opportunity regardless of their antler development.

It’s time for QDM practitioners to resurrect the term “trophy” but to use it to refer to a buck’s age without regard to antler size, shape, symmetry, asymmetry, or Boone & Crockett score. The “trophy” for a buck that meets your age goal is in its mouth – it’s the jawbone. This, and not the antlers, is the true measure of QDM success. For bucks that make it to 5½ and beyond, the jawbone is also the true measure of their ability to avoid hunters – it’s their measure of survivability!

The hunter who can show restraint by passing young bucks and then legally and ethically harvesting older bucks deserves to be recognized accordingly. So, when you display the head or European skull mount of your buck – whether he is 2½ or 10½ – be sure to include your “trophy” jawbone as well. This trophy provides a visual record of the deer’s age and your success at improving age structure among local bucks, a significant achievement no matter what the age of bucks you put on your wish list.

Here’s what we think. If you can consistently harvest bucks with trophy jawbones – those of ages you rarely saw or harvested in the past – you will have graduated to the next level as a deer hunter. More importantly, you will be properly managing your herd for the future!