How Bucks Use the Vomeronasal Organ During the RutAre you primed for the rut? A whitetail buck has a special organ in the roof of its mouth that helps it get primed. In this video, our founder, Joe Hamilton, explains how the vomeronasal organ works.

Posted by The Quality Deer Management Association on Monday, October 23, 2017

Yesterday, I received my first whitetail biology photo assignment as a new employee at QDMA. CEO Brian Murphy needed a photo of a vomeronasal organ.

My first reaction: Okay, no problem. I’ll do it.

My second reaction: You need a picture of what?

The vomeronasal organ, or VNO, which is located in the roof of a deer’s mouth, was something I had never heard of before. But what exactly is it? Brian explained it is part of a “sixth sense” that deer have to detect chemical signals in biological fluids, particularly urine, and that it serves a role in the sexual relationships of deer much like Viagra.

Hold on. So deer have a natural Viagra? This photo assignment and Brian’s description got me curious enough to dive into some research, and the answer appears to be yes, in a way, they do. But it’s not as simple as just taking a pill. Rather, it seems more like a process where certain scent molecules in a doe’s urine trigger the buck’s reproductive instincts to go on high alert in preparation for opportunities to breed. The VNO does not detect a doe’s readiness to breed; a buck’s nose can apparently make that determination. But the VNO makes sure the buck is stoked and ready for action when the nose detects an estrous doe.

Turns out the vomeronasal organ, which is also known as the Jacobson’s organ, is present is many animals. In fact, even us humans have a VNO which was once thought to be non-functional, but the extent of human use of the organ is a topic for debate among scientists and not the focus here, although I’m sure you may be more interested in that now, too.

Back to the deer VNO. It basically functions like you would expect a nose to function and detects chemical signals we know as pheromones. Ever seen a deer curl its upper lip and sniff? It’s actually bringing scent molecules from urine into contact with the VNO.

Buck: Curls his lip back and sniffs, detects certain chemical signals with his VNO that are present in doe urine when breeding season is near, and his passion to breed heats up.

Doe: Urinates, and the urine contains chemical signals that she is ready to breed.

Buck: Sniffs the wind and detects the scent of the hot doe. Since he’s already primed and ready, he sets off in hot pursuit.

Hunter: Witnesses a doe cross a path in front of his stand, buck trails behind, but both cross the path too quickly for a shot.

It’s probably an occurrence you’ve seen before while hunting, particularly around the rut, but it’s kind of neat to have a little more insight into what you are witnessing.

As for the photo shoot, it’s not everyday that you are sent to take pictures of the roof of the mouth in the head of a dead deer (you can see one of my photos by clicking in the Gallery below). But that’s what I got to do over at the University of Georgia Deer Research Facility, and it is what spiked my curiosity to learn more about the VNO. It truly goes to show that you learn something new everyday, and the inspiration to learn can come from just about anywhere. 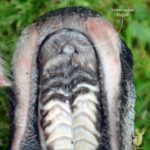