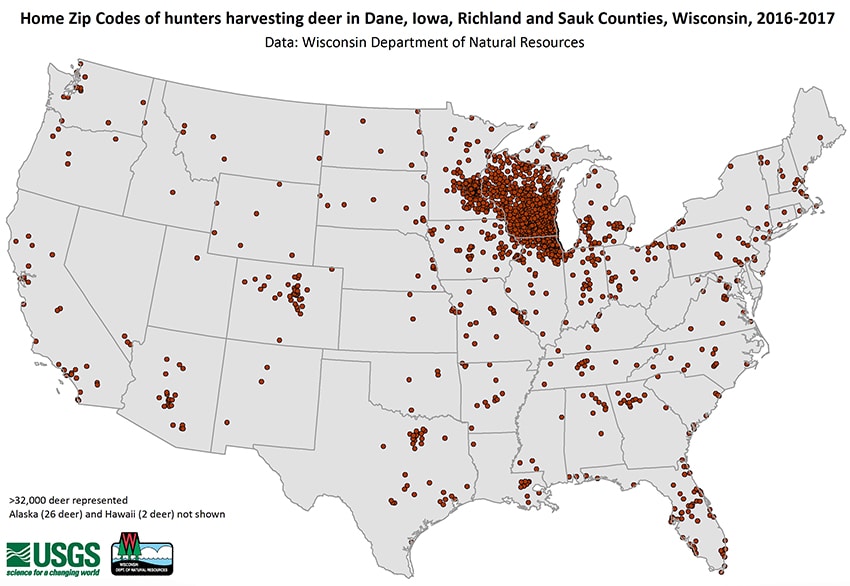 This map scares the hell out of me. Once you understand what it shows us about deer hunters and chronic wasting disease (CWD), it should alarm you, too. It’s a map of one of the ways we will lose the war against CWD unless we take action, and I hope it shocks us awake.

In the 2016-2017 hunting season, more than 32,000 whitetails were killed by hunters in the four Wisconsin counties with the highest incidence of CWD in the state – Dane, Iowa, Richland and Sauk counties. The red dots on the map above are the home zip codes for every hunter who harvested at least one of those deer. Yes, hunters from 49 states killed deer in Wisconsin’s CWD hotbed in 2016-17. Only Delaware was not represented in reported harvests. Even hunters from Alaska (26 deer) and Hawaii (two deer) traveled to Wisconsin to hunt in those four counties that year.

Why is this alarming? Consider all of the following.

These four counties, which adjoin each other and form a block in southwest Wisconsin near the borders with Illinois and Iowa, are the hottest CWD infection zone in Wisconsin. If you were patterning your turkey shotgun, and each pellet was one record of a CWD-positive wild deer on a target shaped like the state of Wisconsin, you’d want these four counties to be the gobbler’s head. And you’d have a very dead gobbler (see below).

Most of These Deer Were Not Tested for CWD

I’ve learned from Wisconsin DNR that they tested 2,291 deer from the four counties in the 2016-17 season, or 7 percent of the harvest. (There are private services available for CWD testing, but the number of deer tested annually that way is in the single digits statewide.) So, that year more than 29,000 deer harvested in those four counties were not tested for CWD. How many of those untested deer probably had CWD? Well, of the 2,291 that were tested, 17 percent were positive. This suggests approximately 5,000 of those untested deer were also positive.

Most Deer With CWD Appear Healthy

CWD incubates in a whitetail for an estimated minimum of 16 months and an average of two years before the deer becomes “clinical” and begins to show symptoms or act sick, at which point it won’t last much longer. Therefore, the majority of CWD-positive deer killed by hunters will appear to be healthy. You cannot look at a deer you killed and determine whether it should be tested for CWD. If you shot it in a CWD zone, you should get it tested.

where this gets scary

Given all these facts, here’s what we can assume with near certainty: Some number of these hunters killed CWD-positive deer, did not get them tested, and returned home taking parts of those deer with them. The two primary routes for CWD to be introduced into new areas are:

How many hunters left the CWD zone or even the state of Wisconsin with an entire deer carcass, field-dressed or not? No doubt some of them did, especially those who lived close enough to drive rather than fly to Wisconsin. We can’t know how many, but it’s not zero. We can’t know how many of those CWD-positive carcasses were transported into areas or states that don’t yet have CWD in whitetails, but it’s not zero. And it’s happening every hunting season.

Regulations are being broken in many of these cases, because most states now ban the importation of certain deer carcass parts to prevent CWD entering their state. In fact, a review of regulations shows there’s no land route out of Wisconsin for a hunter hauling a carcass with an intact spinal column and skull. Every bordering state bans the importation of these parts, though Illinois allows it if you are taking the carcass directly to a licensed meat processor in Illinois. But just because there are rules doesn’t mean hunters know about them. Most of these laws are relatively new, and surveys have shown that few hunters are aware of them (The low testing rate alone suggests that few hunters realize the precautions they should take with deer harvested in these counties). Nevertheless, many states are starting to make cases for violations. Last season, Tennessee and Mississippi, among other states, charged hunters for illegally importing banned deer carcass parts into their home states.

The infectious prions that cause CWD are concentrated in a deer’s nervous system, especially the brain, spinal cord, eyes, spleen, tonsils and lymph nodes. If these parts are discarded outdoors, prions will remain in the environment after the carcass has decomposed or been scattered by scavengers. Prions are extremely tough and do not decompose for many years. No one knows for sure how long they last, and they can infect new deer that come in contact with them.

Of those non-zero number of hunters who left Wisconsin in 2016-17 with intact carcasses of CWD-positive deer in the backs of pickups, we can’t know how many of them butchered those deer at home or delivered them to processors or taxidermists. From there, we can’t know how many of those infectious parts like brains and spleens ended up discarded in the woods where they could potentially introduce CWD to healthy deer in a new area. But it’s probably not zero.

“Clearly there is an opportunity for the inadvertent movement of infectious material within and across jurisdictions,” said Bryan Richards of the USGS, who helped produce the map. “And this opportunity is not unique to Wisconsin.”

The map shows 15 zip code markers in my home state of Georgia, which does not have CWD to our knowledge. A road trip from here to southwest Wisconsin would take about 14 hours – not easy but not impossible with a hunting buddy to share the wheel. Did any of those Georgians make a road trip and haul home a deer carcass? If not in 2016-17, what about other seasons? And as Bryan pointed out, Georgia hunters travel to other CWD zones besides the ones in Wisconsin to hunt each year. The USGS map only deals with one of them.

What About Your Health?

So far, I’ve been concerned with all these hunters from all over the country potentially exposing healthy deer in their home states to CWD. I’ve said nothing of the human health concerns.

There is still no clear evidence that CWD can affect people, but it hasn’t been ruled out, so the Centers for Disease Control and the World Health Organization recommend that you play it safe by protecting yourself if you hunt a deer population known to be affected by CWD. Primarily, you should submit for testing every deer you harvest from that area and wait for an “all clear” before you eat the venison. If the deer tests positive, you should safely discard the venison, preferably by bagging it and sending it to a landfill.

So, go back to those 29,000 deer harvested in those four counties in 2016-17 that were never tested for CWD. How many of the hunters represented by zip code dots on the map above unknowingly ate venison from a CWD-positive deer they killed?

What Hunters Should Do

This map gives us a glimpse of one of the ways we will gradually lose the war against CWD, watching it spread to every corner of the whitetail’s range, unless we take action. Answer the alarm by educating yourself and informing others. If you or people you know hunt deer out of state or even out of your home county, do your homework and learn whether you will be hunting in a CWD zone. If you will be, learn the local rules for tagging, testing and transportation of carcasses. Submit any deer you harvest for local testing, and wait for results before you eat the venison.

Even if you are hunting a non-CWD zone out of state, know your state’s deer-carcass importation rules, which tell you the parts of deer you can legally bring home. This goes for states you will drive through on the way home: Their import regulations apply to you even if you are just passing through. To be safe, never leave any state with more than boned-out venison and a thoroughly cleaned skull plate attached to antlers. Many states ban the importation of hides unless they are tanned or part of finished taxidermy.

This very helpful website compiles all state carcass import regulations in one place. It is hosted by the North Carolina Wildlife Resources Commission.

To stop the spread of CWD and fight this threat to the future of deer hunting, we’ve got to work to inform ourselves, our hunting partners, and even folks we don’t know. QDMA is stepping up our game in this area, too, with efforts like our comprehensive CWD web page, our #KnowCWD campaign, and our recent partnership with onX Hunt to create a CWD map layer. Help us by becoming a member, sharing information like this article on your social media network, and talking to hunters you know. It’s clear that ignorance of this disease and how it spreads is one of the ways hunters are losing the battle already, but we can turn that tide.

To stop the spread of CWD, we need a lot more zeros.