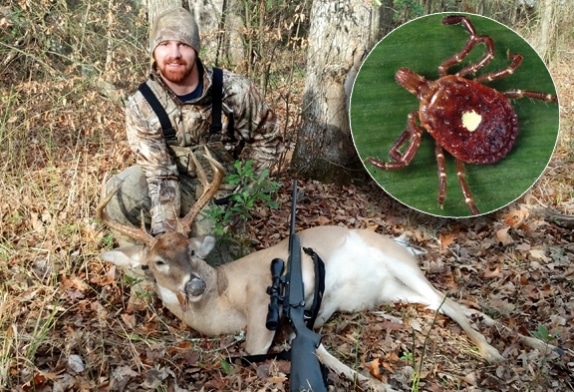 On Thanksgiving Eve 2013, as I sat in the emergency room waiting area for the third time in less than a year laboring over each breath, I watched my forearms turn from pink to purple to almost completely black. I began to face the reality that I may have a tickborne condition that would change my life as a deer hunter forever. I know what you’re probably thinking: A life-changing tickborne condition… Lyme disease? Thankfully, no. Rocky Mountain spotted fever? Guess again. This recently-discovered condition is a game changer (pun intended) for any deer hunter who might contract it, and if it becomes wide-spread, it could have negative impacts on our entire deer hunting heritage.

Three years before this, my dad had a similar experience where he stopped breathing and was rushed to the hospital. After months of running tests, doctors determined my dad, a fanatical deer hunter, had contracted a tickborne allergy to Galactose-alpha-1,3-galactose, or more commonly known as alpha-gal, a carbohydrate found in mammalian meat. My dad’s allergy is so sensitive that not only is venison, pork and all other mammalian meat off the table but so is anything that comes in contact with it. As you can imagine, this is a very inconvenient condition for any carnivorous person, let alone a Quality Deer Manager! Sadly, my dad is now a regular at the same vegan restaurants that he used to despise and poke fun at. Now, if that doesn’t scare you into tucking your pants into your socks and spraying your clothes down with permethrin, I don’t know what will! And now I’m sure you can relate to why I simply did not want to accept that I too had the alpha-gal allergy.

Around the same time my dad was diagnosed, I began struggling with some allergies, such as hives and itchy throat on and off but not anything as severe as what my dad was dealing with. Friends and family suggested I likely had the same allergy, but I refused to believe it. After all, if it were true, I would have to face the harsh reality of what that meant for me and my identity as a deer hunter. You see, like most of you, I am very passionate about deer hunting and management; so much so that I pursued education in wildlife management and am now a professional wildlife biologist. That’s me in the photo above, with a quality buck I killed recently.

My denial continued until the night before Thanksgiving 2013, when I ate a beef hot dog. After dinner, I spent the remainder of the night visiting with family and friends until I headed to bed. I woke up several hours later with my body covered in hives and my throat rapidly swelling shut. I was going into anaphylactic shock, and I am lucky I woke up at all. I knew it was very serious this time, and I had to get to the hospital as fast as possible.

To almost no one’s surprise, a few blood tests revealed that I did indeed have the alpha-gal allergy. In fact, the allergist said I had the highest levels of the alpha-gal antibodies he had ever seen. He explained that antibody levels are directly related to the number of lone star tick bites one gets. That’s right; not only did I have the condition I was so strongly in denial about, but I had it worse than anyone they’d ever seen! It made sense, too, because when I first noticed my symptoms I was working as an intern conducting feral hog eradication efforts on one of Georgia’s barrier islands, and it wasn’t uncommon for me to pull up to 30 ticks off my body each day. It is probably no coincidence my dad had his first reaction only a couple weeks after spending a weekend on the island with me.

Once I found out and accepted I had the allergy, I researched and learned as much as I possibly could so I could help raise awareness, particularly to the deer hunting community. In the remainder of this article, I will share most of the pertinent information available to date regarding alpha-gal, but for more details or for future reference, there is a website that aims to provide information and raise awareness about the allergy.

What Causes the Mammalian Meat Allergy?

Tick bites from the lone star tick are the culprit causing the allergy (unlike Lyme Disease, which is transmitted by the blacklegged tick). In fact, the allergy was first discovered in 2006 by University of Virginia medical researchers when several cancer patients began having allergic reactions to a certain medication that happened to contain alpha-gal. Further investigation showed that the geographic distribution of the allergic reactions correlated with areas of high incidence of Ehrlichiosis, another tickborne disease unique to the lone star tick. All the patients who reacted to the medication also reported developing allergies to mammalian meat after being bitten by ticks.

Research has since confirmed that lone star ticks induce the allergy. The saliva of the tick causes the immune system of some people to produce antibodies specific to alpha-gal, but researchers have not yet discovered why, since alpha-gal is an otherwise benign substance. Most tick borne conditions arise when a tick introduces a specific harmful bacterium into the bloodstream, but not all ticks carry harmful bacteria. With this allergy, it seems that any lone star tick bite can cause increases in antibodies specific to alpha-gal in some people.

What Are the Symptoms?

Symptoms of alpha-gal allergy occur several hours (4 to 6) after ingesting mammalian meat, and include upset stomach, diarrhea, hives, itching and/or anaphylaxis. Each allergic reaction is more severe than the previous one. Be sure to get tested if you believe you have the allergy; even if you have experienced a mild reaction. Some people only react to certain mammalian meats, and meats with higher fat content (like hotdogs) seem to elicit more severe reactions.

Do Some Areas Show a Higher Risk Than Others?

Is There Any Medication or Treatment?

Avoiding mammalian meat is the only treatment for this allergy. Fortunately, there is some evidence to suggest that as long as the patient is not re-bitten by ticks, the antibody levels continually decline and the allergy may eventually go away.

An Ounce of Prevention

This allergy is life changing, and if you are one of the people who is susceptible to this allergy, you’ll be sorry if you don’t take time to reduce your chances of getting tick bites. The only way to avoid contracting this allergy is tick-bite prevention. So, be sure to take the extra precautionary steps such as treating boots, clothing, and gear with permethrin after every couple weeks of use. Wear long pants and rubber boots whenever possible, and be sure to tuck your pants into your boots to prevent ticks from crawling underneath your pants leg. If you are wearing shorts, be sure to spray your legs and any other exposed skin with 20 to 30 percent DEET. Most importantly, don’t forget to thoroughly check yourself for ticks every time you get out of the woods. The sooner you can check, the better. Ticks don’t technically “bite,” it is more of a very slow puncture as the tick is trying to attach to you. The sooner you remove them, the more you reduce the chance of disease or allergy complications.

As I tried to wrap my mind around my new reality – a deer hunter allergic to deer meat – I was filled with conflicted thoughts and my emotions ran wild. Should I still deer hunt? Is it still ethical? How am I going to justify to my wife all of the time and money I spend on hunting? How will this affect my ability to one day introduce my kids to hunting and the circle of life? I had just scratched the surface on the list of ways this allergy interfered with my former way of life and potentially my plans for the future.

Then, I couldn’t help but think about how devastating it could be for our deer hunting heritage as a whole if this allergy became an epidemic. Needless to say, deer hunting recruitment and retention could suffer greatly. The ironic and yet unfortunate part is that hunters are probably most susceptible to contracting this allergy due to so much time spent in the woods in pursuit of mammalian meat. In the original research article published in 2009, the authors discussed that this allergy is likely to become an epidemic due to increasing suburban deer populations and in-turn, lone star tick populations. They also mentioned hunters specifically in their article as one of the three patterns of patients they saw develop the alpha-gal antibodies because we get bitten so frequently. The other two patterns were severe allergic reactions to one or two bites and being bitten by hundreds of larval ticks (also known as “seed” ticks) simultaneously.

I am hopeful that my allergy will one day go away, but even if it doesn’t, I will continue to pursue my passion in deer hunting just as my dad has since he was diagnosed. In fact, my dad traveled to where I work in Florida to deer hunt with me this past fall. He shot a couple hogs that another hunter was more than happy to take. Though it presents some unique challenges now, deer hunting and deer management are still a major part of who I am. Nonetheless, I would hate for this to become an epidemic in the hunting community. Take time to spray down before you head to the woods, and do your part to spread the word about tick-bite prevention and the alpha-gal allergy.