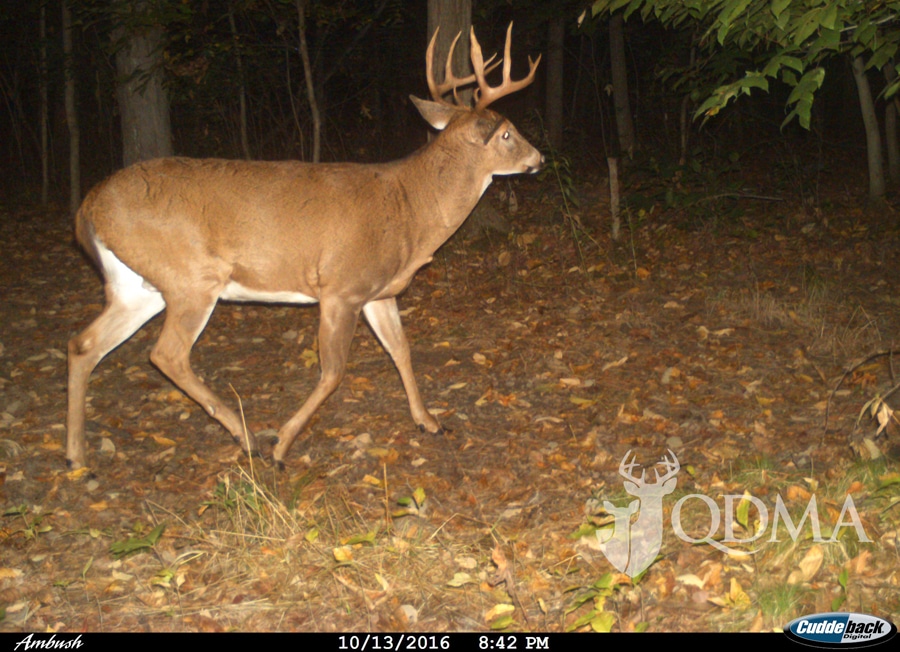 If you love to run trail-cameras over scrapes to inventory unique bucks where you hunt, then you’ve experienced the love/hate relationship of sorting and tracking the hundreds or thousands of photos that can quickly fill flash cards during the rut. I just picked up a super tip from a QDMA member that will help me better organize, sort and search unique bucks in my photos, allowing me to spend more time loving the photos and less time hating the sorting and searching drudgery.

Granted, I’m probably more extreme than the typical trail-camera user. While a normal person like you might pull out a couple of photos of your biggest bucks, name the bucks, then share them with a few friends, I dive down the rabbit-hole of information found in the entire photo collection. I like to identify every unique buck, from the scrawniest spike to the heaviest hit-lister, so I can visualize buck age structure and check the pipeline supply of bucks at every level. For example, here’s a 2015 age structure pyramid from a Georgia property I hunt:

QDMA member John Hammer of New York is an extremist like me. He digs trail-cameras and the data they provide, and he also captures some great photos for estimating buck age. I got to know John after he started submitting photos for “Age This!” in Quality Whitetails magazine. We’ve used John’s bucks in the magazine a few times over the years and also for “Age This!” polls in our free e-newsletters. Most people send us their best buck ever, but John sends us aging shots for bucks of all ages, including yearlings and 2.5-year-olds, which is very helpful.

Recently, John sent me a new handful of photos. Usually, he renames his images in a way that helps me know they belong to John Hammer, but this time I noticed a different naming system than John had used before. The files had names like F1P_5Rx4L_9.JPG and H1A_5Rx5L_10.JPG.

I gathered that “5Rx4L” probably referred to tine count on the right and left sides, but the rest I wasn’t sure about, so I asked John about it.

“I’m sure you’ve already figured out that I’m a data geek who would never name a buck something normal like High Tower or Drop Tine,” John said. “I set it up years ago for my annual camera survey to keep pics of the same unique bucks in series without mixing them with pics of other unique bucks. I keep all the pics in the same data file, and this system keeps pics of the same buck together, in order and easy to find.”

John runs 24 cameras – Duracell Inc. must know him by name – on two properties, and he said he gets 3,000 to 4,000 images per week during the rut. One of the properties is a small wooded tract where he lives, and the other is his farm. His file-naming system is designed to help him keep unique bucks from two different properties separate. Here’s how it works.

How the Code Works

First letter: The first letter clues him to the location. F is for “farm,” and H is for “home.” If you run cameras in only one location, you don’t need a letter like this. Instead, a letter in this first position could be used to identify individual camera sites, if you wanted to keep track of which sites each unique buck did or didn’t visit. That’s what I plan to do.

First number: This is the buck’s unique “name,” which is based on his order of appearance in a single season. The first unique buck you encounter in your annual photo inventory will be No. 1, and so on.

“When I’m on stand with my grandson, he’ll say ‘Hey Papa, there’s 17!’, and I’ll know exactly which buck he’s referring to,” said John.

Next letter: This is a sequencing tag for the unique buck. 1A is the first shot of this buck you save. 1B is the second shot of this buck, and so on. This limits you to 26 images of any one buck in your files without adding a second letter or number, but I generally don’t save every single image of a given buck, just the best files for identifying him and aging him from different angles. So, 26 should be plenty for me. If John needs more than 26, he starts adding sequential numbers after he hits “Z.” For example: F1Z1_5Rx4L_9.JPG.

The middle part of the code is the buck’s antler conformation, as I mentioned before. 5Rx4L is a 9-pointer with five tines on the right, four on the left. These sections of the code will help with searching, as I’ll explain in a minute. To apply this consistently throughout a season, you’ll need to decide on your own rules for what qualifies as a “point,” whether it’s “you can hang a ring on it,” a point that would likely meet the 1-inch Boone & Crockett definition, or some other criteria.

First, giving bucks numbers instead of names works a lot easier. I used to name every unique buck. For the older ones on the hit-list, I’d get more creative. For younger ones, I’d come up with something fast, simple and descriptive like “Short Brow 8.” The problem comes along when a second but different 8-pointer appears that also has short brow tines – and I promise you he will. Then you’ll be going off the deep end with “Other Short Brow 8” and “Yet Another Short Brow 8” and “Shorter Brow 8.” And I don’t even want to get into the naming of unique spikes! Trust me, I’m all about the numbers now.

Second, the searching! Toward the middle to later part of a season, remembering and recognizing unique bucks from earlier gets very difficult, especially with the younger ones, which will always be the most numerous. All the spikes, fours, sixes and young eights begin to overlap in my memory banks by this point. This is where John’s code is genius. If you see what you think is a new buck, count his head gear to determine his antler code: Let’s say it’s 3Rx4L. Next, simply do a search for “3Rx4L” in your unique buck folder, and all the 7-pointers with that antler conformation will be sorted out. This is much easier than having to scan your entire collection of buck images for the year to see if this new buck is merely a duplicate. You could also search for “7.JPG” and pull up all the 7-pointers. If you add a letter code at the beginning for camera sites, then you could search terms like “A9” to see all the dates when Buck 9 appeared at camera-site A.

What About Perennial Bucks?

Many of us follow uniquely marked or otherwise recognizable bucks across multiple seasons. How do you number a buck you recognize from a previous season? John does not use the previous season’s number. Instead, he grabs a quality shot or two from last year, copies them into this year’s buck file, and renames them with this year’s unique number and location, but adds the year.

Stay with me, now.

For example, let’s say unique buck No. 17 pops up on your camera this year, and you realize he’s the same deer as buck No. 5 from 2015. John copies a last-year shot into this year’s folder and renames it F17_2015.JPG. This way, it pops up with the other Buck 17 images from this year as a reference to what he looked like last year (or in any additional years past) while preserving this year’s total buck count and ordering of appearance at a given location.

Could you do it the other way and stick with the first number you gave this buck? Certainly, but I suspect this could lead to even more confusion. Truth is, when a recognizable buck starts showing up in repeated seasons, you probably have an informal nickname for him anyway, so an alternative is to create a separate image folder for “Bucky” and copy all his images from all the years into that folder for anytime you want to visit memory lane with Bucky. There might be image files for buck 2, 7 and 13 in that folder, but they’re all Bucky, and you know where and when he showed up in each season.

Another small matter: In this blog, and in my own coding system, I inserted underscore marks to separate the sections of the code, like this: F1P_5Rx4L_9.JPG. John uses small hyphens in his, like this: F1P-5Rx4L-9.JPG. For my eye, the underscores make a more clear separation. Other separators could include long dashes, dots, or slashes. Use what works best for you.

That’s really the final message: Use what works for you. If this systems sounds interesting, try it, and I hope you find it helpful. Tweak it to fit your needs. Or, if you have a better system, please share it by commenting below. Don’t be afraid. You are not alone. Trail-cam data geeks like us should learn from each other!