Whitetails are rutting somewhere in their range from August through February. Amazingly, they breed over this seven-month period just in the state of Florida! Let’s look at the factors that lead to widely varying breeding dates, and you’ll also see how practicing Quality Deer Management can make the rut more obvious and more exciting where you hunt. (This article is a short sample from QDMA’s “Quality Whitetails” magazine. Start receiving our magazine now!)

Photoperiod is the Trigger

Photoperiod is the interval in a 24-hour period during which a plant or animal is exposed to light. Photoperiod is directly tied to growth, development, and seasonal behaviors in plants and animals. With respect to whitetails, photoperiod regulates some hormonal production that is directly tied to antler growth and the breeding season. A diminishing ratio of daylight to darkness triggers behavioral and physiological changes that lead to breeding. First, antlers mineralize and bucks shed their velvet. Next, bucks begin sparring, rubbing trees, and making scrapes. This transitions to some fighting to establish dominance and breeding rites and eventually to breeding. 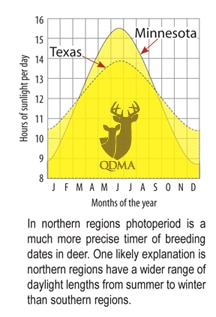 Rut Factors in the North

In northern regions photoperiod is a much more precise timer of seasonal changes. This is likely due to: 1) northern regions having a wider range of daylight lengths from summer to winter (see the graph on the right) than southern regions, and 2) climate being critically important for doe and fawn survival.

Does bred on time put little energy into fetal development during winter when nutrition is most limiting (energy demands are highest on the doe during the final stages of the pregnancy). Their fawns are born into a favorable environment from a temperature, cover, and forage perspective, and fawns are allowed maximum time to grow before the onset of the next winter. This also allows does to recover body condition and build the necessary fat reserves for breeding and winter survival. Does bred later have fawns later, thus they have a shorter growing season and the doe has less time to prepare for breeding and winter. Breeding earlier than the optimal time can cause even bigger problems. The doe may be forced to provide abundant resources to the growing fetus before Mother Nature has made them available to her. This can result in reduced doe health which may predispose her to predation, disease, or other mortality. It can also result in increased fawn mortality.

The bottom line is northern whitetails have a narrow breeding window to optimize doe and fawn health and survival. This is why numerous studies across the northern United States and Canada looking at conception dates show very little year-to-year variation. In fact, these breeding dates are amazingly consistent from year to year – regardless of moon phase, weather patterns, or other variables. This is not to say these variables don’t affect deer movement patterns. They may, but they haven’t been shown to affect breeding dates.

Rut Factors in the South

In southern regions, breeding dates aren’t as cut-and-dry. The photoperiod change is less dramatic, the climate is less severe, and there is less need to breed “on time.” This may explain why the breeding window is wider, but it likely does not explain why published reports show peak breeding in October in east Texas, December in Arkansas, January in Mississippi and Alabama, February in the Florida panhandle, and October in southeast Georgia. All of these regions share a similar photoperiod, so there are clearly some other factors involved. According to Dr. Karl V. Miller of the University of Georgia, southern deer are still under the influence of photoperiod, but exact timing of the rut is more influenced by genetics and maternal factors, and the synchrony of the rut is more influenced by herd demographics. This means photoperiod controls the approximate season of breeding (fall or winter), but the deer herd’s genetics likely influence the exact timing of breeding. The synchrony or “tightness” of the rut is then governed by how well the herd is managed. Herds under QDM, with balanced sex ratios and improved buck age structures, have “tighter” or more synchronous ruts, which leads to increased rutting behavior, competition for breeding, and enhanced hunting opportunities. Poorly managed herds with unbalanced sex ratios and young buck age structures generally lack these benefits.

How QDM Intensifies the Rut

Not seeing many rubs and scrapes in your area? This may be directly related to an absence of older bucks. According to Karl, one mature buck can make 1,000 to 1,200 rubs per year. Over a 90-day period that is 10 to 15 per day! This means a deer herd with an older age structure and balanced sex ratio can have over 3,000 rubs per square mile! Contrast this to a deer herd with a young buck age structure where yearlings make less than half as many rubs, and you may only have 400 to 500 rubs per square mile. Yearlings also only make about 15 percent as many scrapes. This equates to less sign for hunters to observe, fewer prime places to hang a trail-camera, and fewer “communication” posts for deer to exchange information. It also means less rut behaviors witnessed by hunters, such as chasing, grunting and buck fights. Grunt calls and rattling antlers are also less effective where QDM is not practiced.

Regardless of where you reside in the whitetail’s range or when your rut occurs, it’s nice to know you have the ability to improve the health of the deer herd and especially your hunting opportunities by practicing Quality Deer Management.