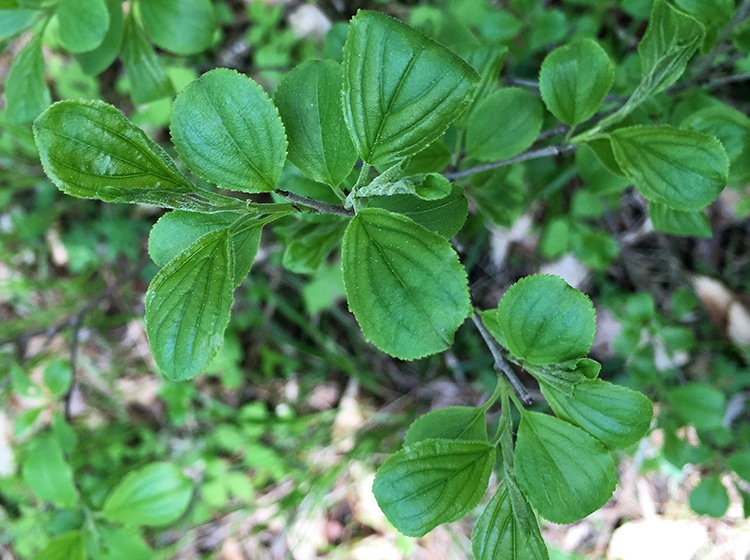 Don’t be fooled by the name: This common tree will not be a valuable addition to your whitetail hunting land. Introduced to the United States for use along roadsides, hedgerows and, yes, in “habitat improvement projects,” common buckthorn (Rhamnus cathartica) has grown out of control. Today, this Eurasian invasion is found in most Mid-South, Midwestern and Northeastern states and Canadian provinces and is replacing native species of value to deer as forage and cover.

Before we discuss buckthorn any further, let’s make sure you can identify it. Common buckthorn has branches that  generally diverge from the main stem nearly, but not perfectly, opposite each other. Often, these branches are spaced far enough apart to be described as “alternate.” The tree’s bark resembles that of a cherry tree, and for stems wider than your thumb, cutting into them will reveal an orange inner-bark. They bear woody spines at the branch tips, which give the tree its name. Buckthorn are dioecious, meaning that there are separate male and female trees, just like native American persimmons. Females that have been pollinated will bear small, shiny, black fruits in summer, which may persist on the tree into the winter months. 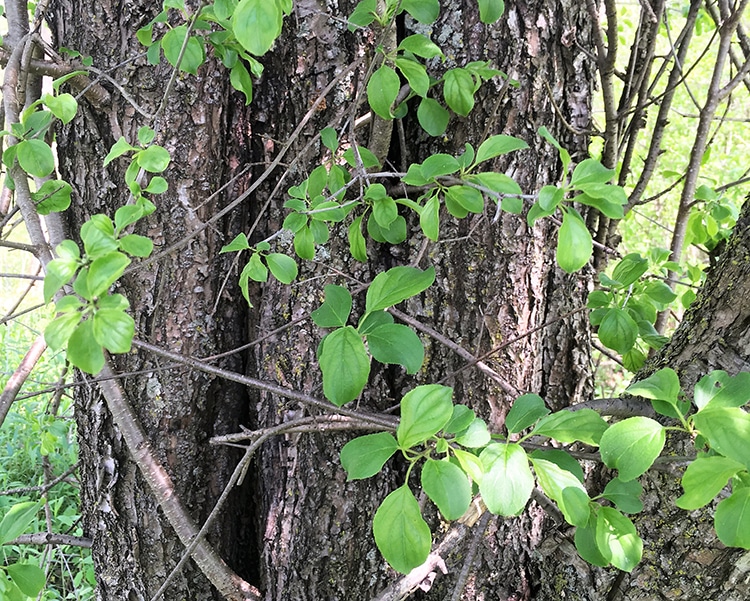 Despite the serious ecological problems that invasive plants cause, some of them provide useful cover. This can make killing or removing them a tough sell to some hunters and landowners who are primarily interested in whitetails. This is not the case with buckthorn. Dick Ballou, an avid hunter in Wisconsin, warned me of this.

“Neither man nor deer will travel through, as the growth literally produces a wall of trees,” said Dick.

As Dick explained, buckthorn will reduce deer visitation to food plots by choking off access. Before buckthorn has become impenetrable, it begins suppressing understory growth, eliminating available browse and seriously hindering your ability to regenerate native trees. They sprout vigorously when cut and produce large amounts of seed that remain viable in the soil, waiting to thwart control efforts. If allowed to grow unchecked, buckthorn will exclude the native vegetation, developing into a living waste of space.

The Plan of Attack

There are many ways buckthorn can be controlled. Herbicide can be sprayed on the leaves, on the bark at the base of the tree (called “basal-bark treatment”), into cuts in the bark, or to a freshly cut stump. Several herbicides are effective on buckthorn, including glyphosate. Be sure to read the label for effective application rates and timing.

Cutting buckthorn results in more sprouts, so uprooting the plant is the only way to prevent this from occurring without the use of herbicide. This means that continually mowing is only a viable option on small patches. Covering a cut stump with a can or “buckthorn baggie” that is fixed in place ensures that the new sprouts emerge in darkness, which may kill the tree.

Which control method best suits you will depend on your budget, the amount of time you have available, the time of year you are planning treatment, the size and age of your buckthorn thicket, and the tools you have to use.

“Effective buckthorn control is a sustained effort,” said Mike Putnam of the Wisconsin DNR. Because of the plant’s ability to sprout when cut, and because of the amount of seed that may be in the soil, a one-and-done attack on buckthorn will be, in most cases, ineffective.

Mike also warned that control methods such as uprooting the plant will cause soil disturbance, which will encourage the germination of seeds. This will be more of an issue in well-established thickets where seed has accumulated over several years compared to newly emerging buckthorn patches which have not yet produced seed.

Because the tree is dioecious, it is often recommended that females are targeted first to prevent continued production of seed. Gender can be identified by examining the flowers, but this is difficult for most and ultimately inefficient. Females are most easily identified when they bear fruit, particularly after leaves have fallen and fruit is hanging on. Identifying females may become difficult or impossible in the understory of a closed-canopy forest in which fruit production may be hindered from lack of light.

Generally, better success is achieved by tackling isolated pockets to prevent their expansion. For this reason, it is worth taking some time to identify and even map out each of the areas of your property where buckthorn is present.

On steep or highly erodible soil where serious erosion may result, it is sometimes best not to remove buckthorn without a plan to stabilize the topsoil until native species can be established.

Finally, before starting your control efforts, begin considering what will grow there next next. If you are planning to control the future composition through planting, check out Matt Ross’s article “Plant this, Not That” for guidance on valuable native species for wildlife that should be encouraged.