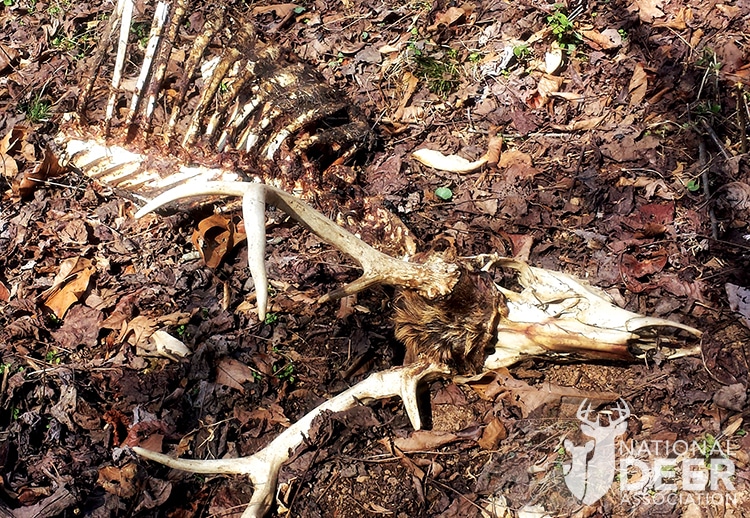 There are many things you might find while roaming the woods this winter and spring, from shed antlers to potential new stand sites, just to name a few of the fun ones. Then there are things we don’t want to find, like deer carcasses. Maybe the carcass resolves the mystery of a deer lost during hunting season, but if not, it’s time to start an investigation. Most of the time the ultimate cause of death will be impossible to sort out from a long list of diseases, accidents and hazards that could be guilty. But if you focus on the following eight areas, you may detect clues that help solve the mystery. So, snap on those latex gloves, draw your chalk outline, and get ready to do some sleuthing!

If the deer is not yet decomposed, study its overall physical condition.

Was the deer healthy and seemingly in good condition when it died, or was it emaciated and in poor health at the time? Noticeable or protruding hip bones, spine, ribs or shoulder blades suggest the deer had been struggling for a while. The direct cause might have been a disease, winter stress or a debilitating injury, or these might have indirectly contributed to its death by making it more susceptible to the predators that killed it. But if the deer appears healthy and in good physical shape, then it’s more likely that a fatal injury, bullet or other sudden factor is to blame. Note the deer’s condition, and continue your investigation.

If you’ve arrived on the scene before decomposition and scavengers have started consuming the carcass, you may be able to locate bullet holes, and skinning the neck or large quarters may reveal small puncture wounds from predators. Coyotes that harassed a deer until they ultimately killed it might have bitten its hindquarters and legs first, and they may have eventually bitten its neck. Bobcats, and in certain regions mountain lions, generally go for the throat, where you may find puncture wounds. If you locate bite marks, take a knife and open the skin around the wound and peel it back. As Kip Adams explained to me, if blood has collected beneath the skin around the wound (hemorrhaging), this indicates the deer was still alive when it was bitten. If you also noticed that part or all of the carcass was covered with leaves or dirt, that’s another good indication of a feline predator like a bobcat.

If only a skeleton remains, evaluate the bone marrow.

Many times we aren’t fortunate enough to be working with a fresh carcass. If scavengers have already picked clean the bones, you can still evaluate the deer’s health using a tip suggested to me by NDA Board member Joe Hamilton.

Generally this works with femurs from deer that died within the past two or three months. Bones that have lain around longer, especially through periods of warm weather, won’t help.

Examine the skull for signs of a brain abscess.

A brain abscess begins with an infected skin injury on the skulls of bucks. As the infection gets worse, enzymes in the pus can actually dissolve bone, penetrate tiny fissures in a buck’s skull and eventually reach the brain itself. This takes a while, but once the infection reaches the brain, the deer will die quickly.

If the deer is relatively fresh and you see signs of a major infection on the top of the head, such as pus around a wound, you may be looking at a brain abscess. Twitter user Illinois Hardwoods found a dead buck recently and shared photos of the skull with NDA. This buck clearly suffered from a brain abscess. 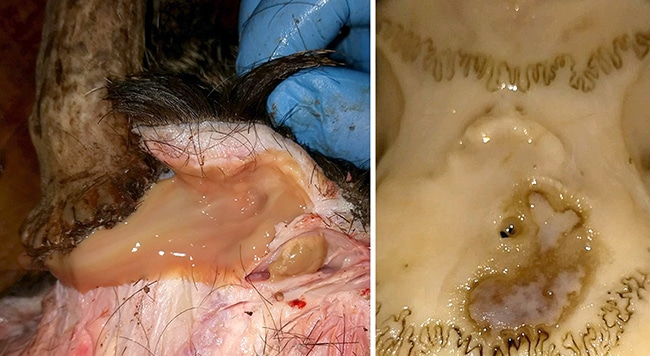 If the deer is not fresh and you are studying a clean skull, you might see abnormal holes in the skull surrounded by eroded or “melted” bone. You might even see one entire antler missing, leaving a large hole where the antler pedicle would have been. You can see all of this in the photo below. 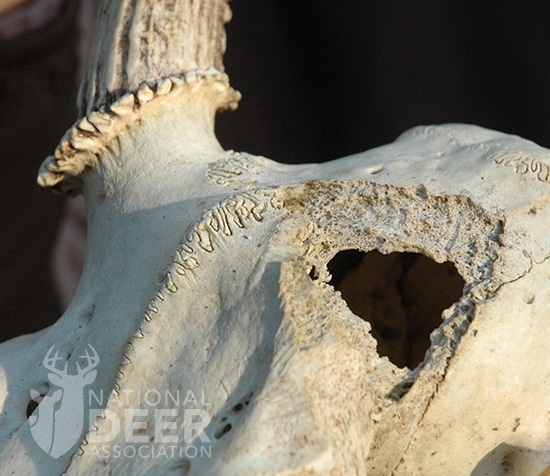 Study the jawbone for age and abnormalities.

While you’re in the vicinity of the head, locate the deer’s lower jawbones and evaluate its age based on tooth replacement and wear patterns. If toothwear is extreme, you may simply be looking at a deer that died of malnutrition and age.

Also look for abnormalities in the teeth or jaw. For example, when deer get food impactions, secondary infections can occur that damage the adjacent bone in the jaw. Various injuries and deformities can also affect the mouth, and they may have contributed to the deer’s death by affecting the ability to eat. The jawbone below, found by Joe Hamilton, is from a buck that apparently suffered a gunshot wound that broke both jaws. A bullet fragment is even visible in one side of the jaw. Though the wound healed and the buck lived for some period of time after the injury, the gunshot may ultimately have affected the buck’s ability to eat and contributed to a slow decline in the buck’s health. 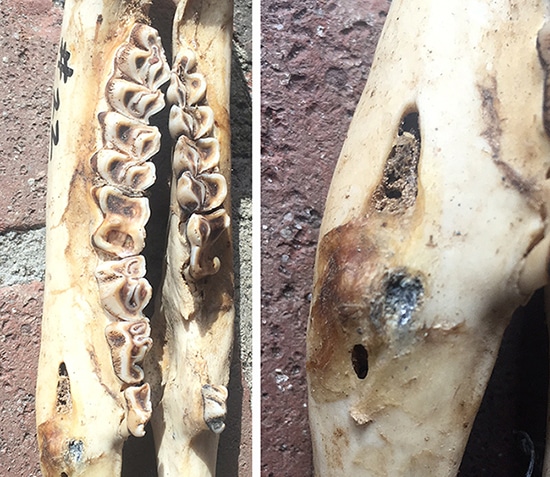 If you don’t find fresh breaks in the skeleton, you may notice older breaks that have since healed. While these injuries didn’t kill the deer immediately, they may have contributed to death by making the animal less able to escape predators or find food in challenging weather.

Examine the hooves for signs of hemorrhagic disease.

Not all deer that become infected with EHD or bluetongue will be killed by these viruses. Those that survive are usually dealing with a number of internal complications that require time to heal, and sometimes these issues catch up with deer in winter when food is scarce.

When deer are fighting these viruses, growth of their hooves is actually interrupted. If the deer survives, hoof growth resumes eventually, but this leaves a break or interruption in the structure of each hoof. The tip of each hoof may be completely gone, or other portions of the hoof may be cracked or in the process of breaking off. If all four hooves of the deer you find are abnormal or damaged in any way, it’s likely you are looking at a victim of EHD. Though the deer wasn’t killed by the virus initially, it’s likely that complications from long-term internal injuries contributed to its eventual death by making it more susceptible to predators, starvation or harsh weather.

NDA member Rob Matthews of Missouri once sent me photos of the carcass of a buck he had recovered. The buck had shed both antlers before it died, and trail-camera images showed that coyotes had attacked and killed the buck. By chance, the deer’s hooves were visible in the background of one photo (see below), and they were clearly cracked as if the buck had survived EHD. As it turned out, the previous fall had been particularly bad for EHD in that area. No doubt in my mind, the buck survived EHD, but the long-term effects left it weakened, caused it to shed its antlers early, and made it more susceptible to coyotes. 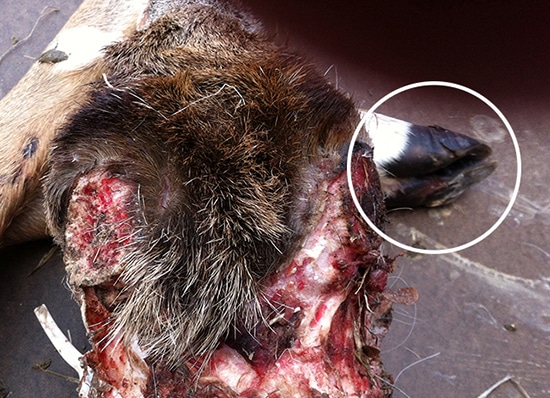 Once you’ve completed your investigation of the deer, now back up and consider the scene. What other evidence do you see that might add information? You might note that disturbances to the dirt or nearby vegetation suggest the deer struggled before it died, either to fight off predators or simply to stand up. The surroundings might include a roadway that, combined with physical evidence, point to a vehicle collision or poaching. Vehicle tracks, litter or spent firearm cartridges might add to the evidence.

In considering the scene, also think about weather. Did a lightning storm pass through recently, and is the deer lying near a tall tree? Scars on the tree from lightning might also be matched by burn marks or scorched hair on the deer.

In late summer and early fall, finding a dead or dying deer in or near water is usually a strong clue that the deer had EHD, because the virus causes high fever and associated thirst.

If you’re dealing with a fresh carcass, and you still haven’t solved the mystery, you might even consider a deep dive inside the deer to look for parasites in major organs, internal injuries, or to open the rumen and see what the deer had been eating. Deer that are struggling to find nutritious food rarely die with empty stomachs but instead are packed full of indigestible plant parts.

Take all of your observations and see if they point to one or a limited number of causes. If you suspect illegal activity like poaching, report your findings to your local wildlife law enforcement officer. If you’re in an area of concern for chronic wasting disease (CWD), and you suspect the deer died of a disease, contact your local state agency wildlife biologist or Deer Project Leader. However, only fresh carcasses are useful for disease testing.

The list of things that kill deer is a long one, and it includes the usual suspects as well as freakishly rare accidents. Pinpointing a cause is not always possible, even for the experts. But hopefully these suggestions will help you get a little closer to an explanation the next time you locate a mysterious deer carcass.