When Georgia first legalized hunting deer over bait in the southern half of the state in 2011, my dad felt compelled to install corn feeders on our family farm simply to compete with the expected landslide of bait in the wider neighborhood. Dad placed some of his trail-cameras on the corn feeders. Meanwhile, I continued to place my cameras on scrapes and trail junctions. Over the years since, I’ve seen a clear pattern. Corn cameras capture mostly does and yearling bucks, and most of them at night. My cameras capture more bucks overall, including all of the fully mature bucks seen in any photo. The difference can’t be explained by hunting pressure, because we don’t sit over the corn feeders.

What I’m describing is not science, it’s just an anecdotal observation. I didn’t tally all the photos, identify all the deer, and run the numbers through statistical analysis. But in another part of Georgia, someone did. With statistical reliability, scientists saw a similar phenomenon to what I witnessed at Grace Acres. Let’s take a look at their results.

David Stone earned his Ph.D. from the University of Georgia studying deer use of bait sites, and some of his findings have now been published by scientific journals. One of David’s primary questions was whether social status, sex, or age of deer play significant roles in which deer use feeders. To answer this question, he ran trail-cameras on 16 feeding sites in two consecutive hunting seasons (mid-September to early January) on a 4,000-acre tract of hunting land in Georgia in 2013 and 2014.

Trail-camera surveys prior to the study estimated a deer density of around 40 to 50 per square mile and a balanced sex ratio of one buck per 1.1 does. Buck age structure was very well developed: 61% of all bucks were 2½ or older. In fact, 39% were 3½ or older, more than a third of all bucks! The property, including the feeder sites, was actively hunted during David’s camera study, though pressure was considered “light.” Around 10 deer were killed each season, which is around one deer per 400 acres, including does and mature bucks.

To keep photo analysis manageable, David pulled a sub-sample of photos from three days (Mondays, Tuesdays and Wednesdays) from each week of the two hunting seasons. After excluding fawns from the count, he sorted out all photos of deer he could confidently identify as one of three categories:

To analyze social interaction, David pooled yearling bucks and all does together as “subordinate” deer and all adult bucks as “dominant.” He also separated photos by night and day, with “daytime” being defined by legal hunting hours.

David had his answer about segregation by social class right away. Out of the sub-sample of 6,994 photographs containing deer that could be categorized, “dominant” adult bucks of at least 2½ years of age appeared in the same photograph with a “subordinate” doe or yearling buck only 54 times, less than 1% of the photos.

“These adult bucks rule the feeders,” said David. “When they’re on scene, the other deer stay away.”

The breakdown of social interaction is seen in the chart below.

What Would A Hunter See?

A hunter sitting over one of David’s corn feeders would have been three times more likely to see a doe or yearling buck during legal hours than an adult buck during the pre-rut through the end of October, according to David’s findings. This difference in visitation was reversed at night. Adult bucks primarily used the feeders at night in all seasons, but the difference was most significant in the pre-rut.

Though adult bucks were sometimes photographed in daylight at feeders, this was a fairly rare occurrence when you consider the total number of photographs. To study statistical probability of feeder use, David evaluated total hours monitored by the cameras and which deer, if any, “occupied” those hours. He determined his cameras monitored nearly 10,000 hours of daylight in his sub-sample from the two seasons. During the pre-rut, only about 1% of those daylight hours saw an adult buck at the feeder, either with or without a subordinate deer at the feeder at the same time. Sure, this counts mid-day hours when deer movement is normally at a 24-hour low, but if you sit and watch the first two and last two hours of a day, you’ve hunted more than 30% of that day’s daylight hours in fall.

If a hunter was determined to see an adult buck at a feeding site during legal hunting hours, their best opportunity was in the post-rut.

This is particularly discouraging when you recall this includes all bucks 2½ or older. If you were only counting bucks 3½ or older, the frequency is no doubt much lower, and it’s more diminished if you sort down to even older bucks. This is not for lack of adult bucks at the study location. The study property and thousands of acres around it have been under Quality Deer Management for years, and the county has a mandatory antler restriction that protects all yearling bucks. Remember, deer density was relatively high, the sex ratio balanced, and an estimated 61% of all bucks on the property were 2½ or older: Knowing these details about the location, a hunter waiting for an adult buck to appear at a corn feeder would be disappointed in the action.

During the rut peak, which was October 26 to November 27 at this location, visits to feeders by all deer were at their lowest slump. To David, this made sense based on available movement data from other studies of whitetails. Adult bucks are moving more during the rut peak than any other time of year, but they are not focused on food. They’re focused on breeding. Meanwhile, does that are not in estrus may be trying to make themselves scarce to avoid bucks during this time, so avoiding sites like feeders might also be advantageous.

However, David was less able to explain why yearling bucks were scarcely seen at feeders during the rut. They participate less in the rut, and the near absence of dominant bucks at the feeders presents yearlings with an opportunity to eat more. Why didn’t they? One possible explanation is hunting pressure. Most of the hunting took place during the rut, and hunter activity logs showed that most hunting centered on food plots and feeders.

Again, a hunter expecting an exciting peak-rut hunt on well-managed land with plenty of adult bucks would be extremely disappointed in their time spent watching a corn feeder on this land, judging by David’s camera evidence. Whatever the best stand locations were for seeing all those adult bucks on this land, this study showed they weren’t at corn feeders. 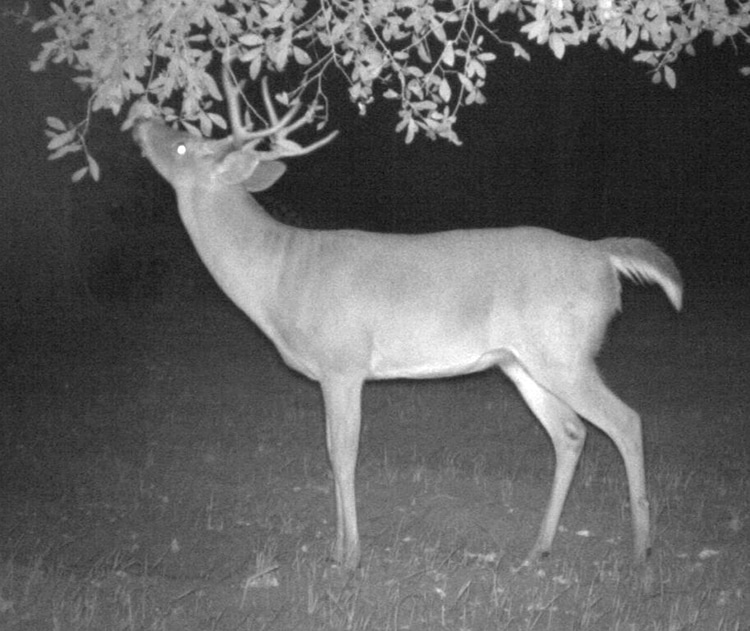 In David’s study, this changed in the post-rut, and you can see it in the graph above. No longer focused on breeding, and now trying to make up for those weeks of intense rut activity, adult bucks appeared at feeders at the highest rate of the hunting season. Still, only 6% of the daylight hours in the post-rut saw the appearance of an adult buck (12% of the night hours). This remains a very low activity rate considering adult-buck density on this land, but if a hunter was determined to see an adult buck at a feeding site during legal hunting hours, their best opportunity was in the post-rut.

To me, David’s findings help explain camera trends on our family hunting land. During the peak of our rut, almost all of the adult bucks are photographed over scrapes and in travel corridors as they pursue breeding opportunities – not corn. Scrape photos still don’t necessarily show us a likely to place to kill those bucks, since most of them are taken at night, but at least we know the bucks are in the area.

David’s study, which was funded by the Georgia DNR Wildlife Resources Division, also looked at the movements of GPS-collared bucks in the vicinity of these feeders. Those results are still being analyzed, and we’ll share them as soon as they are available. Sign up for our e-newsletter to always stay informed of our latest deer content.