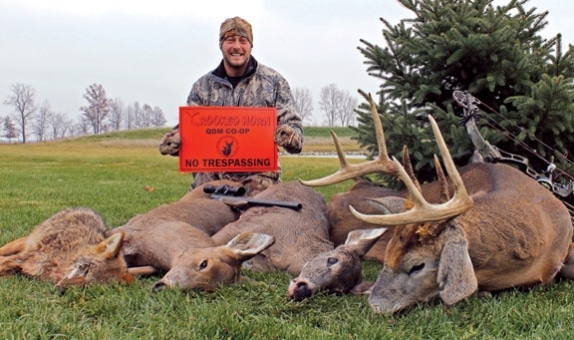 If you were to sit 10 QDMA members down and ask each of them why they joined the organization, there is a good chance you would get 10 distinct responses. Some might say they joined for the educational resources offered by QDMA, while others might have joined to make a difference in their community. Whatever the reasoning, each could agree on one thing: being a member is all about what you make it.

Scott Homrich, president of the Southeast Michigan Branch, joined QDMA 12 years ago to make his deer hunting more fun and to become a better deer hunter. Now a Life Member, Scott is the founder of the Crooked Horn and Maybee Area QDM Cooperatives. During a Q&A session, Scott described his journey with QDM and what he has discovered to be the true benefits of membership – why he belongs.

How long have you been practicing QDM?

I have been practicing some form of QDM for nearly 20 years, several years before I knew what QDM or QDMA even was. It was somewhat uncomfortable to shoot does in our camp, but by the time I was 20, I had harvested a few yearling bucks and had rarely even seen a mature buck. That changed in 1996 because that season I was lucky enough to harvest a nice 10-point. That buck has changed my outlook ever since. I started passing yearlings the next season because I wanted to shoot a good “wall hanger” and figured that shooting a “small” buck wasn’t going to help my plan. I muddled through the next few years learning a lot about deer behavior but not really recognizing that fact until several years later. I was getting somewhat frustrated as my time and efforts didn’t seem to be getting rewarded. In 2000, I even shot a 6-point yearling I dubbed the frustration buck. As I learned more and more about QDM, the reason I pass yearlings and now 2½-year-old bucks has changed dramatically. Our camp’s outlook on doe harvest has changed dramatically as well.

What are your favorite benefits of QDM?

My favorite benefit of QDM is a toss up between the education I get by watching and studying deer or the year round process that deer hunting now consumes. I no longer have the desire to kill everything; I enjoy watching and observing the subtle things that bucks, does and fawns do in their normal daily life year round. This has made me a better hunter as I pay attention to the details of what deer are doing and why they are doing it. While on stand, I keep good notes on how deer use the habitat features that I created during the off-season and adjust them as needed when time permits.

With a young family where my kids are just starting to tag along, the offseason habitat work will offer many hours of family time together and hopefully keep the kids interested in the outdoors for life.
What rewards have you gotten from participating in a QDMA Branch?

I would have to say the single greatest reward I have received while participating in the QDMA Branch has to be the friendships. I have become friends with so many different people that share the same hunting and habitat passion, it is impossible to list. I have gone on out-of-state turkey, bear and elk hunts as well as been invited to join camps on whitetail hunts with friends that I have met through QDMA activities. I also can drive door to door in our Cooperative and sit down with my neighbors at any hour of the day and would be welcomed with open arms.

Tell us about the hunting story pictured here:

This year I was fortunate to have the opportunity to kill a 3½-year-old buck with my bow that we had named “Floppy” because of his “broken” left ear. He has been on our farm since he was a fawn, and we have pictures of him year-round since that time. Knowing that he was a 3½, he made our hit list this year.

When he was a fawn, I was walking along a travel corridor in our CRP field on my way to hunt that afternoon and he stood up to browse, not more than 10 yards away. So I watched him for a few minutes until he decided to lay back down and rest, allowing me to continue on to my afternoon hunt. Little did I know that three years later I would be the one to take him with my bow at 10 yards just a couple days before our gun season. He turned out to be our average 3½-year-old, weighing 225 pounds live and scoring right around 125 inches as an 8-point.

After harvesting Floppy, I hunted the next morning hoping for a doe with my bow. The does didn’t cooperate, but I was greeted by a female coyote at 17 yards. I then followed up those two hunts the next day with two, 2½-year-old does on our gun opener to finish off a pretty successful three days of hunting.