Every buck’s path in life is unique, and so is every buck’s antler growth progression. Ups and downs come with external factors like drought (or, conversely, abundant rain), poor mast crops (or heavy ones), severe winters (or mild ones), injuries (or the lack of), and disease (or good health). In the middle of his life a buck might drop in antler size from one year to the next in response to such factors, or he might make an unusually large leap in antler size from one year to the next. So, no one has a crystal ball, and no hunter is safe reading fortunes for any individual buck.

However, we know that taken as a group and averaged out to determine the norm, bucks grow a larger set of antlers each year of their life up to a point. The graph below, based on research at Mississippi State University and Texas A&M-Kingsville, is a striking visual depiction of this knowledge. It shows the average percentage of maximum gross Boone & Crockett score achieved by age class. 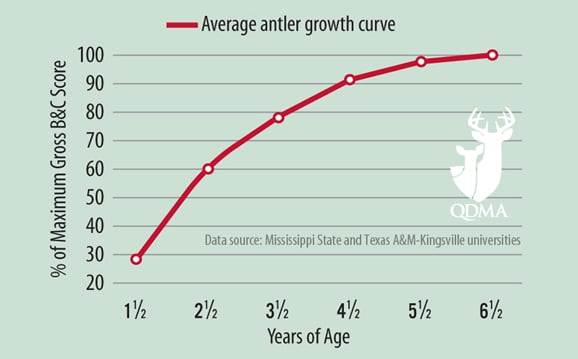 Even though some individual bucks will stray from this red line, we can extract a number of broader lessons and guidelines from the graph. Here are a few points that stand out to me.

The gains in antler growth are biggest in the early years. A buck will likely make his greatest leap in antler size, as a percentage of his lifetime potential, from 1½ to 2½ years of age – nearly doubling his antler size and expanding from only 30% of his potential to 60% of his potential. “Let him go so he can grow” is most relevant to yearlings, because they will likely make a big jump in antler size if they can only survive their first year with antlers. This is a great selling point to get non-QDM’ers to test the water and begin protecting yearlings. You’re not asking them to wait till a buck is 5½. If they can pass that forkhorn yearling and shoot him next year at 2½, they’ll be dragging out a significantly larger buck, both in body and antlers.

A middle-aged deer is a nice buck for any hunter. For many good reasons, a lot of hunters choose wisely to take bucks at 2½ or 3½ years of age. This is perfectly within the goals of QDM; anyone who says you have to wait for full maturity when practicing QDM is flat wrong. Moreover, these hunters are taking a really nice buck. At 2½ a buck is likely displaying 60% (the majority) of his lifetime antler potential. At 3½ he’s likely displaying 80%. At this point, he might have been “a good one next year” but likely not a whole lot better. A buck that scores in the 120-class at 3½ is unlikely to become a Booner, and most hunters (if they are totally honest about it) turn into wobbling jelly when they see a 120-inch buck. I know I do!

For more advanced QDM’ers, aging mistakes are critical at 3½. If you are among the uncommon hunters who enjoy an abundance of adult bucks where they hunt, you may now be trying to kill bucks at the peak of their maturity and antler size. This chart shows you the importance of recognizing and protecting high-scoring 3½-year-olds. Those rare bucks on the right side of the bell curve, the valedictorians in their age class, will really be impressive at 3½. A buck that reaches the 170s by full maturity is likely 140 at 3½ and in the 150s at 4½, a size that will severely test your commitment to your age estimate!

“Standing crop” decisions can start at 3½. Dr. Steve Demarais and Dr. Bronson Strickland of Mississippi State University wrote a great article for Quality Whitetails recently about “standing crop” management for hunters in advanced stages of QDM success. Once you’ve produced an abundance of adult bucks, it’s wasteful to kill only the top performers and pass the bucks on the left side of the bell curve just because they don’t score high. That’s a recreational opportunity and hunting achievement someone could be enjoying, not to mention the venison. If you are confident a buck is 3½ or 4½, and he’s on the low end of antler scores for that age class where you hunt, this chart helps you confidently green-light that buck and enjoy the harvest earlier than you would with others. You must first determine the average scores by age class for bucks where you hunt to be able to make these decisions correctly, and you can get this age and antler score information from bucks you’ve already killed. But, remember what Steve and Bronson said in their article: the weakest link in this process is usually the hunter’s skill at accurately judging age and antler score of live bucks!

“Huntability” is the missing line on the graph. We don’t have definitive research on this, but I think hunters and researchers alike can agree that bucks often get harder to see and kill as they get older. They may become more cautious or nocturnal, but they also might die of some other cause in the meantime. If we could chart that relationship and combine it with the graph featured here, it would likely show us a distinct trade-off. If you choose to let a buck reach 100% of his antler potential at age 5½ or 6½, you are accepting a greatly increased risk of not being able to see or kill the buck at all. At 1½, bucks are curious, inexperienced, and visible. At 5½, not so much. I believe this should factor into your decision to take or pass a buck using this graph as your guide. While that 3½-year-old in your sights might be “a good one next year,” he may not appear in your sights next year. Understand that passing such a buck doesn’t guarantee he will be available for harvest in the future.

There’s one more factor you can’t and never will see on this chart: Fun. No two hunters approach buck-harvest decisions from the same perspective or experience level. When you see and study a buck in the field, you won’t have to look at this chart or any other numbers or science to know whether he’s one you want to take home with you. If he makes you a happy hunter, who cares what he’d have been next year? He’s a great buck right now.

No other deer hunting organization or publication keeps an eye on deer research like QDMA and our magazine, Quality Whitetails. QDMA even directs funding to projects that can improve our knowledge of deer, make us better hunters, and help secure the future of deer hunting… nearly half a million dollars since 2006! Stay on the forefront of new deer knowledge, and help directly support new research into deer behaviors, by joining QDMA today!